Well, I’m back! This is the first edition of my new monthly newsletter- Living with Grace and Grit. Each newsletter will include a blog, a health tip for the week, a link to a video, featured events where I’ll be out and about teaching, and tips about books and other valuable resources.

Since my husband Gordon and I recently returned from a bucket list adventure- an African Safari- I thought you might enjoy sharing a little snippet of the trip. 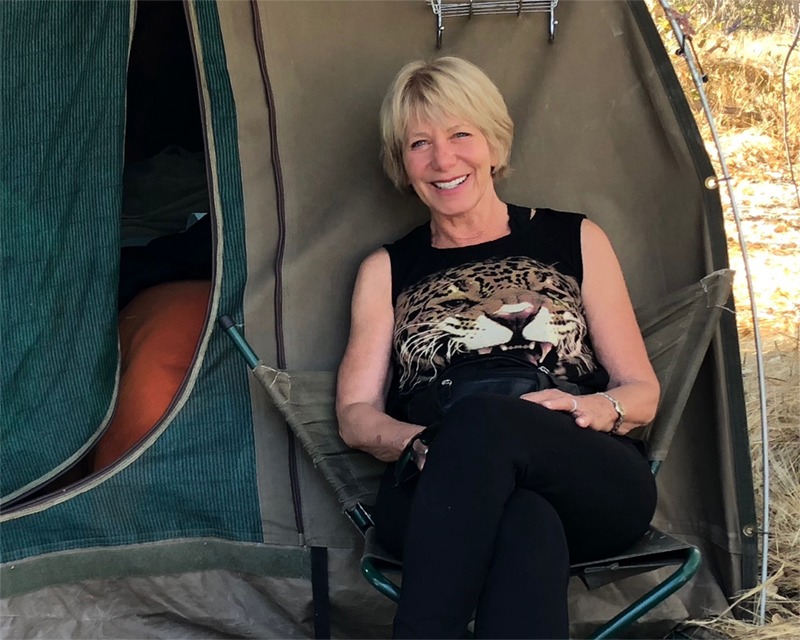 Yours truly outside our tent in the Chobe National Park, Botswana

We set out on June 11, 2018 for Botswana, a safe and thriving democracy bordered by South Africa to the south, Namibia to the west, Zambia to the north and Zimbabwe to the east. Botswana is magical- a peaceful democracy that values and cares for its people and its environment- with the richest concentration of wildlife in Africa. Their anti-poaching program is strictly enforced, with the result that there are now too many elephants! We frequently saw moms with their babies, and whole elephant families. 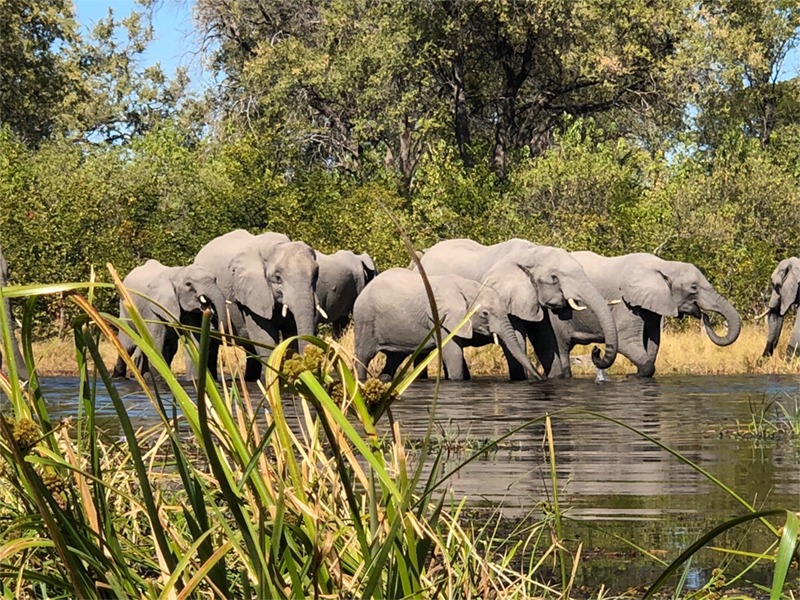 Part of a family of about 30 elephants wading in the Okavango Delta wetlands area- often called the last remaining Eden on Earth- that borders the great Kalahari desert to the south.

Our intrepid group consisted of 14 people from the US and Mexico, two heartfelt, brave, and talented naturalist guides- Peace Shamuka from Botswana and David Carson from neighboring Zimbabwe- as well as 6 talented safari staff who did everything from make and break down our camps, dig the somewhat precarious pit toilets (I managed to fall off ours and live to tell about it), fend off numerous wild animals among whom we were living, maintain a campfire for us to warm up around before breakfast and dinner, and cook gourmet meals in iron pots over a fire in the middle of nowhere.

Their open hearts, great knowledge of the area, and superb care was a deeply personal and sweet part of the trip for us. Quite a lot of us got teary when it was time to say goodbye. Our trip organizer Deborah Stephens owns Baja Adventures and used to live in Botswana. We were so fortunate to go on one of her rare mobile safaris. 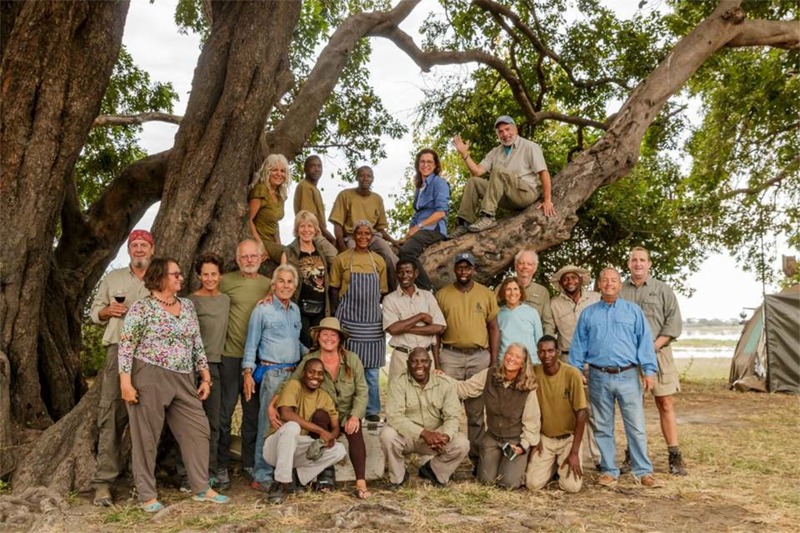 Here is a photo of our group.

Walking around the camp anywhere at night (it gets dark about 6 pm) was strictly forbidden without a staff escort as lions, hyenas, hippos, elephants, snakes and the like frequently wander by. Some nights were particularly interesting as we tried to figure out who was snarling, yowling, yipping, snorting, hissing, huffing or puffing close by. One afternoon a poisonous puff adder took up residence right outside our tent. Thankfully, the staff took care of the threat. The serpent’s appearance made us extra mindful of where we stepped… and, I might add, squatted.

My husband Gordon and I prepared for the safari as for a vision quest- an opportunity to leave everyday life behind, and to enter the Great Unknown where habitual identity is lost, creating the conditions to see ourselves anew. I needed to prepare with a meaningful ritual. So, a week before we left, I stood in front of the bathroom mirror and cut off most of my hair. I figured that we’d be out in the bush for 10 days with no electricity, and only rudimentary camp showers. I needed wash ‘n wear hair! I plan to keep it short for a while- revealing more of my true self.

It is amazing that as long as you are in the Safari Jeep, the animals don’t recognize you as a potential predator- or a potential snack. It’s like being invisible, which means that we could watch them from very close quarters. We were able to follow several leopards- and some cubs- deep into the bush both in the Moremi Game Reserve on the first leg of the safari, and later in the magnificent Chobe National Park where we camped in two different areas. We also saw several prides of lions. 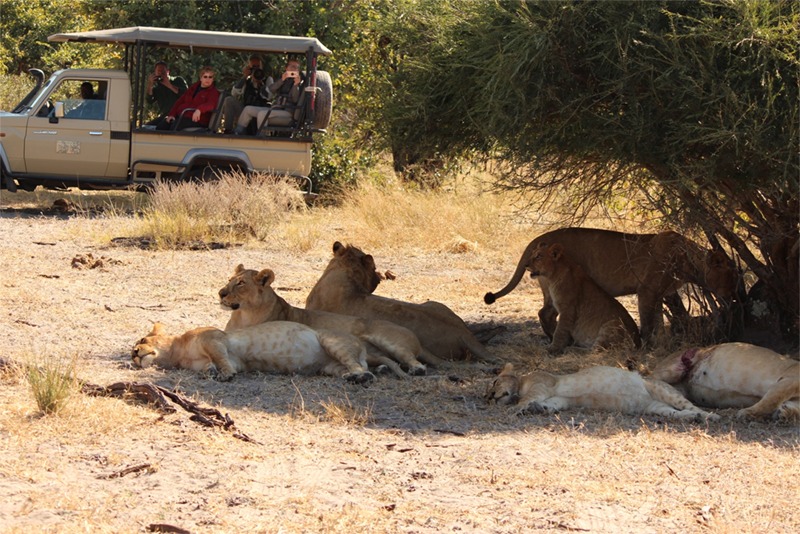 Half our group in their Jeep, gazing at a pride of resting lions whose bellies are at the bursting point. They have just finished eating an eland- a good size antelope- and won’t have to eat for another week or so. 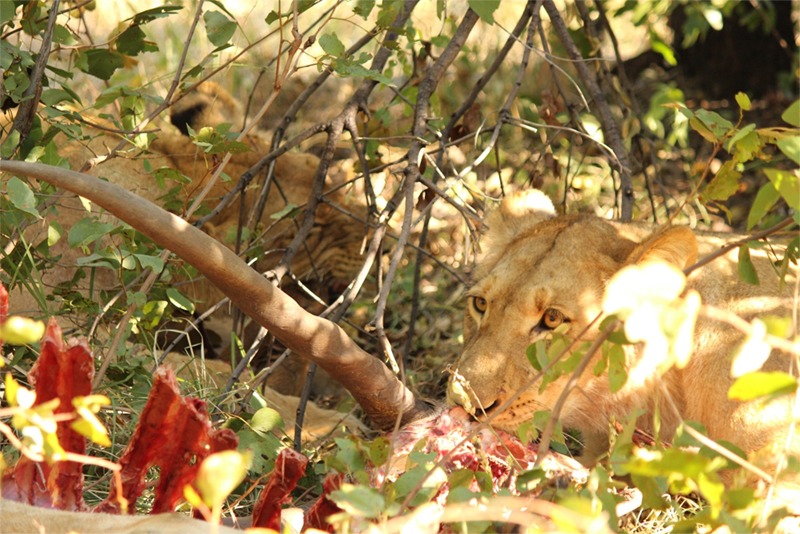 Here is a lioness in the bush, snacking on rib of said eland. A minute later she licks her chops, gets up and takes a stretch, then saunters over to the rest of the pride to sleep off her meal in the equivalent of a big puppy pile.

Large herds of impala roam the savanna. They are the favorite prey of the big cats and the wild dogs. As Alfred Lord Tennyson wrote in the 19th century, nature is “red in tooth and claw.” The cycle of life is uncompromising and majestic, touching and raw. Everything is part of the whole with nothing wasted. 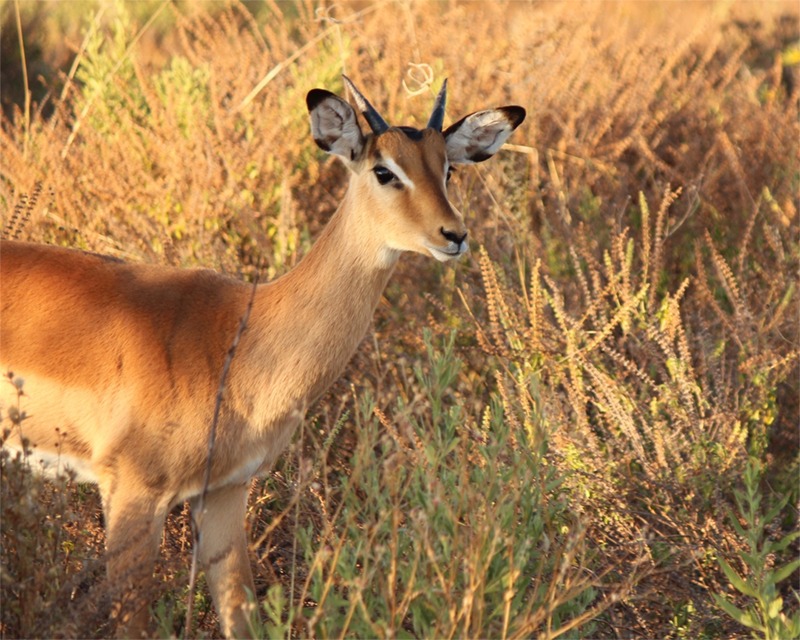 What a sweet face this impala has! 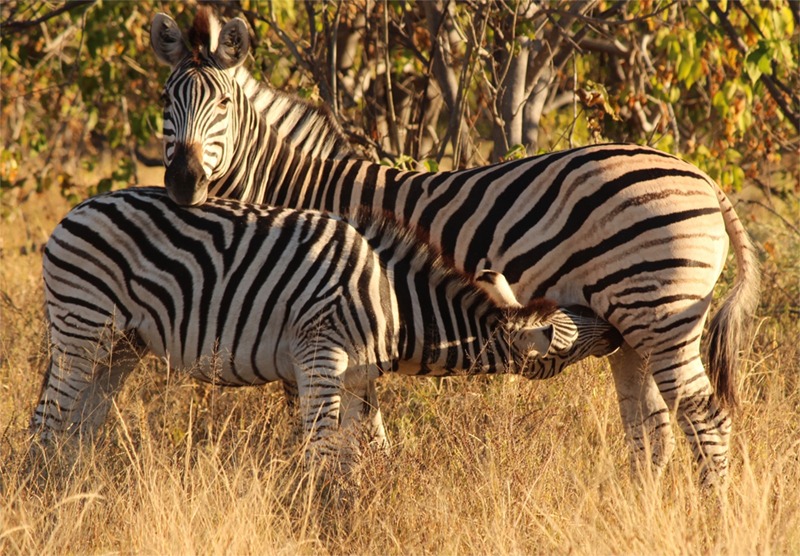 Here is an older zebra colt still nursing although he’s almost the size of mom!

We asked if hyenas were big cats, or perhaps canines. Turns out they are neither. They are their own species. The “nanny” hyena below was caring for a group of about 15 cubs from several mothers. The little ones bounded in and out, sometimes nursing, sometimes playing, often fighting with each other.  When the main predators are finished with their meal, in come the hyenas, the jackals, and the vultures. But the hyenas are not only scavengers. They hunt down 60% of their prey. 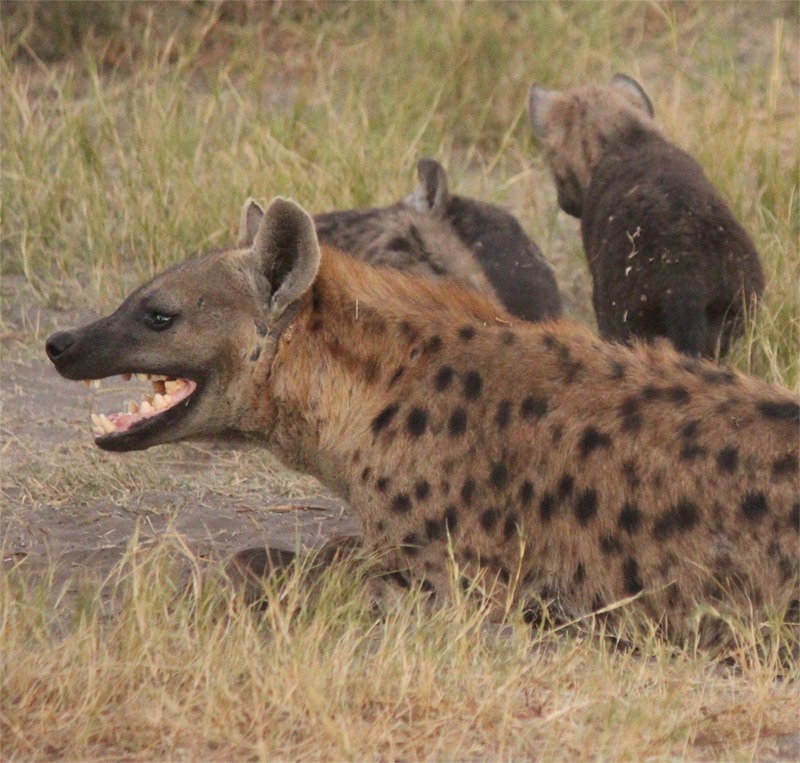 Nanny hyena and a couple of her charges. 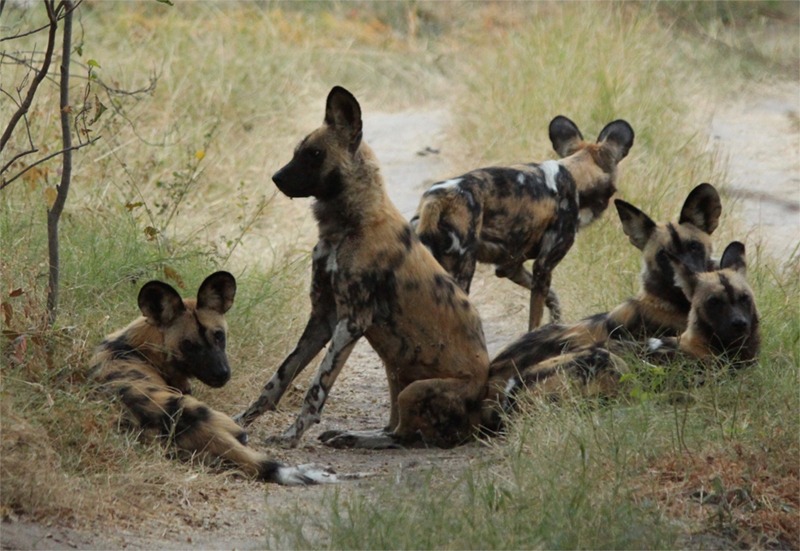 Wild dogs, often called painted dogs, are the most fearsome predators of all. They hunt in packs and are absolutely fearless and efficient. We watched them hunt down an impala. 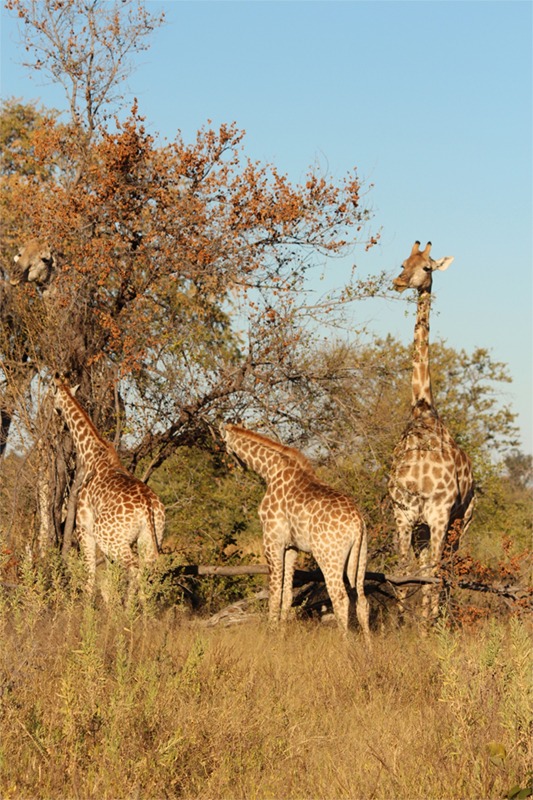 Baby giraffes can also be hunted down by predators, even though their parents stand 15-16 feet tall! 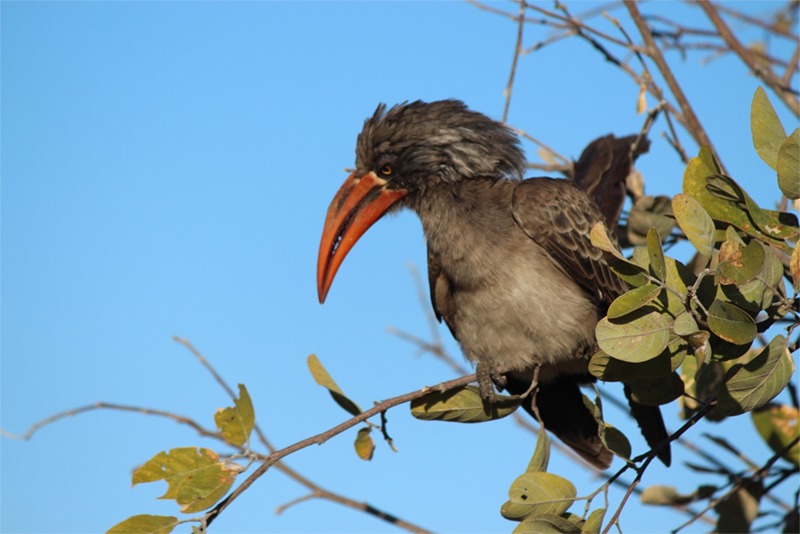 A red hornbill, one of most common of about 450 species of birds on the savanna. The ostrich, of course, is the largest of the lot!

I hope you enjoyed seeing just a few of the hundreds of amazing animals we saw. But wait! There’s more. I saved the best for last. I just love the sleek leopards, each unique in the pattern of its spots. 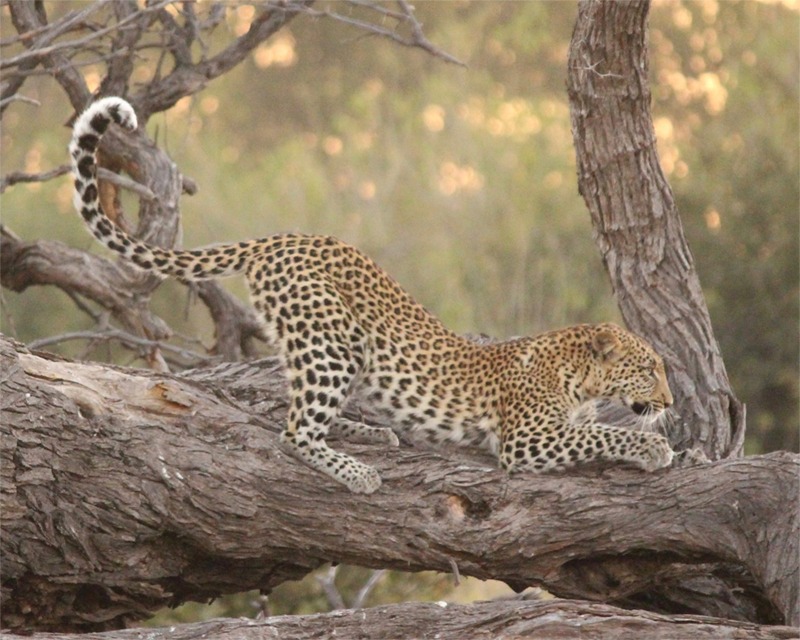 Leopards get up from their naps like any old puddy tat- but there the resemblance ends!

Although we returned home from Africa filled with awe, my husband and I also returned with respiratory infections. That may have been a grace in the end, since it forced us to rest and begin to metabolize the exquisite wonder of our journey, a process that will go on for the rest of our lives.

I am still dreaming of wildebeest and warthogs; baobab trees and teak forests. Somehow, it feels like my natural habitat.

Did you know that we are all descendants of 4 African women? They are called “the mitochondrial eves.” It turns out that mitochondria, the energy plants of our cells, are passed down exclusively through our maternal lineage, since sperm cells have shed their cytoplasm and are essentially a bare nucleus with a tail to swim toward the egg.

If we could only realize that we are all intimately related, brothers and sisters under the skin, it would be a much more peaceful world. So hail to you, Mother Africa, the land of our collective birth. We are all your beautiful children- human and animal alike.

What a wonderful world.

Why Women Burn Out and How We Can Revive Ourselves

Heart and Soul: A Woman’s Spiritual Retreat
Scroll to top